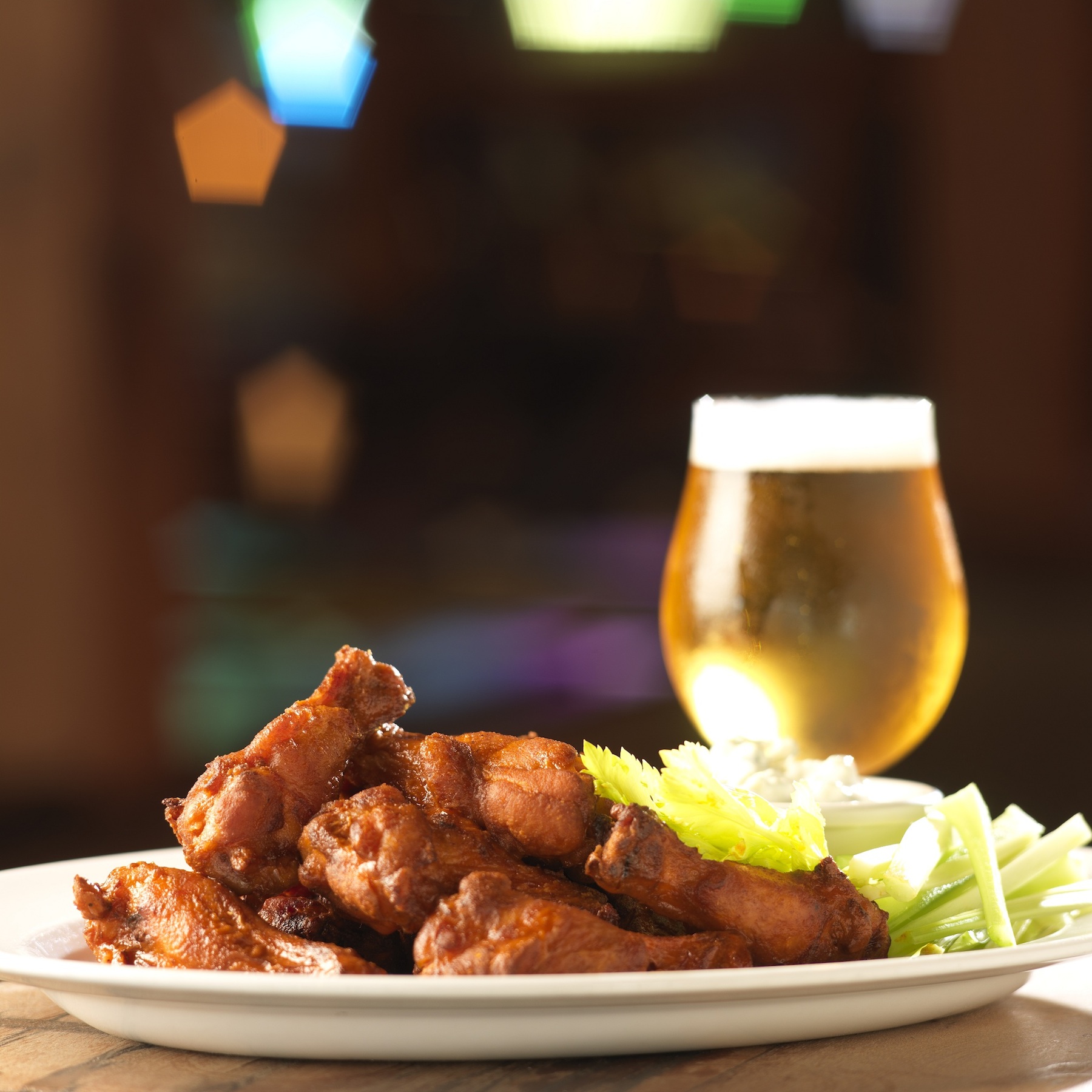 Until recently, I had this thing in my house where I couldn’t convince the wifey of the joys of chowing down on a plate of chicken wings. She just couldn’t get past the messiness and the little amount of flesh on the bones, such hard work for a small return. My wife is a very smart woman, works in IT, so I think she was trying to work out the gastronomic return on investment like she would with installing a new software platform at work.

But see, that all numbers, she was forgetting about the “wing factor”. The wing factor is what I like to describe as that feeling of happiness having just filled your belly full of tasty crispy wings (and beer of course) as you sit there and lick the remaining sauce from your fingers…and then let out a huge belch of satisfaction.

Thankfully for the 3 of us chicken wing lovers on our house, things have changed, I have converted my wife and we now have regular wings nights, which pleases my kids no end. There was one step in-between getting her to try the tasty wings and the point at where we are at now, and that is side dishes. Initially she was like “aren’t you going to do some vegetables with the wings”, to which I laughed uncontrollably and told her that “chips were vegetables” and there was no way I was going to ruin the simplicity and joy of a wings evening by adding healthy vegetables. I won and we now do wings and chips, no vegetables!

Can you tell I am passionate about my wings? I just dedicated 300 words to them as an intro to the real topic of this article…what Aussie craft beer do I like to pair with my various flavours of chicken wings. 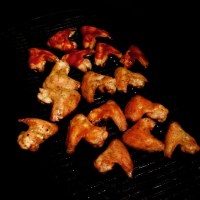 The way I cook my wings is usually on the Weber, I like to season them up with a bit of garlic salt and spray them with that oil in a can to make sure I get a nice crispy skin (not fussed about the low fat factor here). I cook them pretty slow and once the skin is crisp and the underside slightly grilled or charred, I like to baste them with whatever sauce I have on hand to ensure I get plenty of flavour.

So here goes, these are the flavours I like to work with and which beer I choose to drink with them. Don’t forget that this is a personal preference…you may choose to eat your wings with something very different to wash it down…if so, let me know about it. 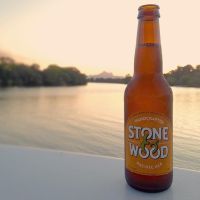 If I am eating plain chicken wings, something is wrong. Either I have eaten all of my allocation of the good ones and have been forced to steal from the ones that I cooked for the kids, or someone else has cooked them and didn’t bother to make “adult” wings. Either way, I will still chow down on the wings, but my beer choice moves more towards a more sessionable, lighter beer. It’s okay as a craft beer lover to drink and enjoy a beer that is not hopped to the hilt, there is no shame in it. For this situation I would call on a beer that I love to drink in the sun, the Stone & Wood Pacific Ale. A bit of a ground breaking beer for the Oz craft market, and now every brewer and his dog is trying to emulate its success. 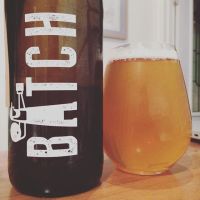 I love me some Nando’s chicken, so I use their range of sauces on these bad boys, nice and spicy without being too much. I like to drink a beer that is kind of the same, some nice hoppy bitterness, but not so much that I obliterate my tastebuds and can’t taste the delicious spicy flavours on the chicken. My choice for these Australian cooked, Portuguese spiced chicken wings is an Australian made, America Inspired beer brewed in Marrickvliie…the Batch Brewing Company West Coast IPA. Packed with “Left Coast” hops, this super easy drinking IPA isn’t going to interfere with the spiciness flavour too much, but will cleanse your palette so you can have another wing! 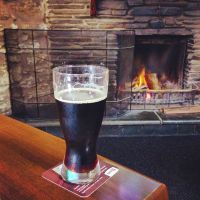 McCormicks have recently released a couple of BBQ Mates sauces that are pretty tasty, I use their VIntage Smokehouse BBQ one for this and it’s delicious. When you whack these on the bbq, you are going to get a really nice grilled/smoky flavour going on. For this reason, I don’t mind switching things up with a Porter on these wings. I go back to an old favourite of mine, a beer that really opened my mind on what beer and food matching could achieve…the James Squire Porter. I once had it with Chocolate Mousse, tried it with a Scotch Fillet and had some sausages that had been boiled in it before being grilled off…every dish outstanding, and it also goes well with these wings. 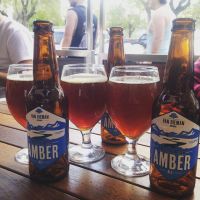 The term “Butt Rubb” is used in a very different way in Australia to the USA. My bother-in-law used to frequently travel to the USA and come back with all sorts of great bottles of mixed spices for meat, the general term used for this type of spice is “Butt Rubb”. I think we use the term of “Season-All” out here in Australia, doesn’t quite have the same ring to it!

If you get a spice mix that has a nice bit of sweetness in it, then I would go with a beer from my home state. I am a big fan of Van Deiman Brewing, and they make a great Amber Ale called Jacobs Ladder. It’s got a really nice malt backbone and a subtle hop addition that will complement the sweet and spicy flavours that you get with butt rub. It’s also a delicious beer to have on its own! 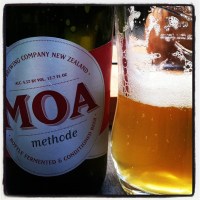 Soy sauce is pretty savoury, the ginger can be a little snappy and you throw in a bit of garlic to round out the flavour. For this I like to keep it simple with a Pilsener, but I am going to muddy the waters by naming a New Zealand brewery for this one. I know I said this was about OZ craft beers, but hey we take ownership of every other good thing that comes across the ditch, so I can do it here. I like the Moa Methode PIlsener, a bottle conditioned Pilsener that is nice and light, yet slightly spicy so as not to overpower the subtle Asian flavours. 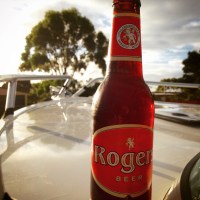 Good old Asian BBQ flavours paired with something nicely balanced is what I would go for here. Teriyaki is more of my wifes style when we have chicken wings, it is well down the list for my good self. I think of this flavour in the same way as I do Chicken flavoured chips…I will eat them and enjoy them, but if there are bowls of Rock Salt, Barbecue, Salt & Vinegar or even corn chips on the table, I will go to them first. Having said that, this is still a nice flavour to pair a beer with and I turn to one of my favourite beers for it, Little Creatures Rogers. With a nice balanced profile and superb flavour for a mid-strength, it goes very well with this flavour pairing. 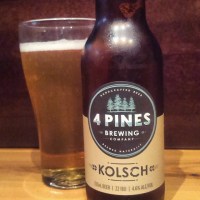 When the occasion requires you to pump out a batch of middle of the road flavour chicken wings, try this marinade. You aren’t going to offend the adults or the kids with overpowered flavours, but it has enough in it to not be too plain. In the same way with choosing a beer to compliment this one, don’t go too overboard with bitterness, but let it have more to it than, say, a chain-brewed light beer. If you have never tried a Kölsch before, check it out. I would describe them as a bit of an entry level craft beer, usually light bodied with a delicate fruitiness. Grab a 4 Pines Kolsch to compliment these wings and you can’t go wrong! 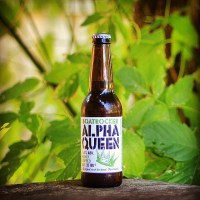 I do love a good satay chicken skewer when the wifey and I get our semi-regular Thai takeaway form the local restaurant. I was hesitant to convert my love of the skewer into satay flavoured chicken wings though, but I have to say that as a change-up they are pretty nice. I am not going to go and have them every time I BBQ, but they are nice for a change of pace. When I do slather the wings in the old peanut sauce, I like to drink something with a bit of hop flavour and bitterness to cut through the richer sauce. For this one I choose the Boatrocker Alpha Queen Pale Ale. Hopped up to 35 IBU’s with Cascade and Centennial hops, this cuts through nicely and makes we want to go back for more…wings and beers! 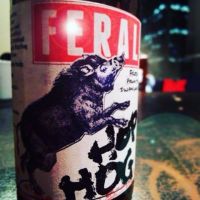 It’s fair to say that I usually don’t partake in the extra hot chicken wings that you need to wash down with a bucket of blue cheese dressing to cool your tongue, but every now and then I will have a few. I like to choose a beer here that will cool and cleanse your palette, letting the flavour come through and dissipate the heat a bit. You can’t go past a Feral Brewing Hop Hog to assist you to wash down these fire balls…5.8%, nearly 50 IBU’s and a nice malt backbone, it works a treat.

So there you have it, my take on a very versatile meal that can be paired with a heap of different beers. But don’t take my word for it, try it yourself and shoot me an email with your findings. beerhealer@internode.on.net

Cheers to great beers! (and wings)