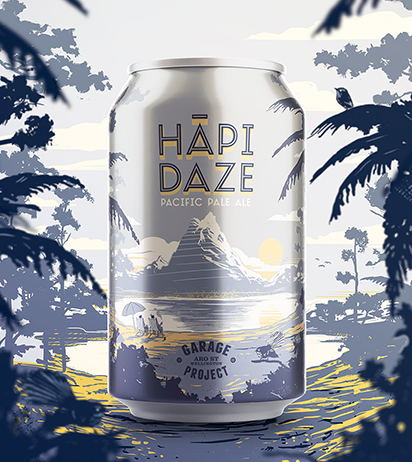 Now I understand that this beer from Garage Project may not be the newest thing going around, but that doesn’t matter here on the Beer Healer…I found it last week in my local craft brew bottle-o, so it’s new to me.

Reading the brewers description of the brew made me think that this was the perfect beer for quenching a much needed thirst after a day of fishing down at the shack, so I lobbed it into my cooly bag with some other nice little craft brews as I set off for the shack on Friday arvo. I love to throw a few different ones in the car for a trip to the shack, then when I am finished I can add it to my collection down in the shed…

I love the name, Hapi Daze, it just fits with what is pretty much a summer-ish session ale. I did feel a little foolish, however, when I found out that the name was a play on words…Hapi is the Maori name for Hops!

Now, if you aren’t familiar with the guys from Garage Project, I suggest you check them out. I have had a couple of their beers now and they have all been very tasty. Across the ditch in NZ, these guys like to do things a bit differently…” You can try things on a 50 litre brew kit that you wouldn’t dream of attempting on a 50 or even 5 hectolitre brew kit. That suits us. We’re here to try something new.” How cool is that! 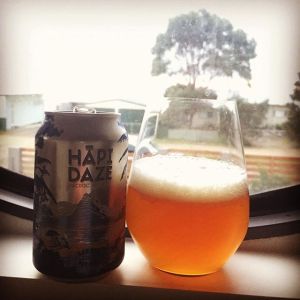 What I like most about these guys is the fact that they do craft beer in cans, it was what attracted me to this brew in the bottle-o at the time. As I was scanning the shelves it was a bit like…European lager…done it to death, Aussie craft…not this time, US APA near date…no thanks, a “Nu Zilund” brew in a can, sign me up! My photo doesn’t do it justice (sorry), check out the product shot at the top of the post, what a great looking can…no wonder I was attracted to it!

So anyway, to the drinking of the beer…On Saturday at the shack it was a friggen magnificent day in paradise, everyone wanted to get on the water so I took my trusty little boat out for a fish with various family and friends in two shifts. We had a cracking day on the water, catching about 20 “size” flatties (flathead fish) and even a little gummy shark that we threw back to grow up. 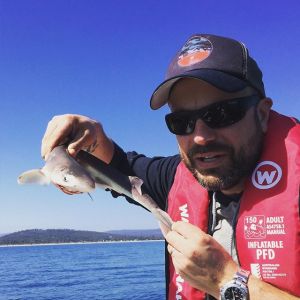 If you are reading this from the other side of the world, you may not have ever tasted a Flathead, but let me tell you that there aren’t too many better fish when you eat them caught fresh that day. After we put away the fishing rods, we put the ski biscuit on and I did my best to not injure my kids and their friends as I threw them around in that for a few hours.

So after a day of fishing and ski biscuiting, you tend to work up a thirst and need to wind down with a few beers. I was busting to try the Hapi Daze, but decided to keep that for when the wifey had served up the fresh catch of the day, so had a few middies first.

The wait was worth it…Hapi Daze and lightly crumbed, fresh flathead is a beer and food match that is very hard to beat. The brew pours a really nice cloudy golden orange colour with a solid creamy head and weighs in at a nice 4.6%. On the nose you get a really nice burst of floral hops, bit of tropical fruit and citrus coming form the all NZ hop bill of Motueka, Wai-iti, Riwaka and Nelson Sauvin. The taste is beautiful and crisp with a nicely balanced bitterness and is very refreshing. 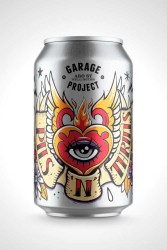 The mix of the beer and the fish left me wanting more, of both, but sadly my kids had polished off the remaining fish when I went to the fridge looking for my second can of Hapi Daze, only to realize that I had left that at home! Instead, I had put in a can of the Garage Project “Pils ‘n’ Thrills” by mistake…so I had that one instead. Also a very tasty brew but I think I have talked enough in this post, so let’s leave that one for another day!

As we are heading into Summer, a few easy drinking summer-ish session ales as the sun goes down might just be what you are interested in, so here are my Top 5:

5.Feral Brewing Sly Fox
An American Blonde Ale which would go down well on any hot Australian Summers day!

3. Deschutes River Ale
One from the good old USA that I wish I could get more of as it made a real impression on me. So sessionable, so refreshing, not trying to be anything it’s not!

2. Mountain Goat Summer Ale
In a can, ready for a fishing trip, easy to chill down and very sessionable.

1. Stone & Wood Pacific Ale
No surprises here, this is the pace setter in my opinion for quaffable summer session ales…keep doing what you are doing boys!

One last Summer beer that I loved while on holiday in Hawaii was the Kona Brewing Co Wailua Wheat…but seeing as it is only available on the island at this stage I didn’t think it was worth including.