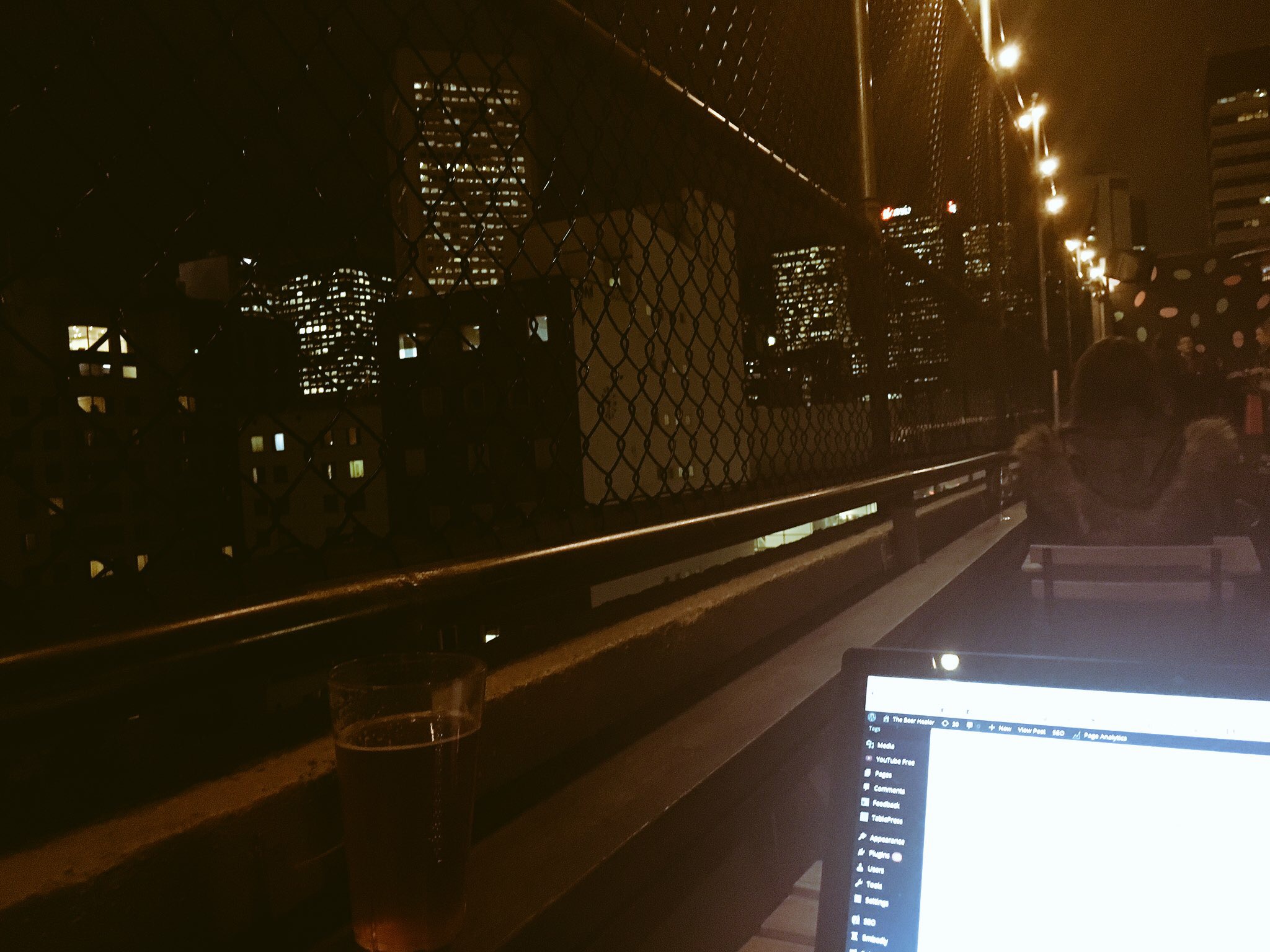 Is the Mini Bar dead? Can Craft Beer revive it? 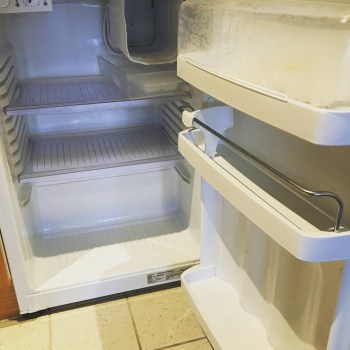 What a sorry looking sight…sigh!

It’s 8pm on cold Autumn Wednesday night in Melbourne and I am sitting at the Rooftop Bar typing away, while I freeze my ass off! Why? Cos my hotel room had a mini bar with nothing in it…not one beer!

When did the Mini Bar die? Why did it die? Is it gone forever?

I think we kind of know why the mini bar has kind of died off…it’s too friggen expensive to drink it! But, what if craft beer could revive the mini bar and give hotel patrons something more than the usual fare. You know what I am talking about, the mini bar is usually filled with some near-date local mainstream beer, a boring light version that has the word “premium” in it, and something from overseas that is just as uninspiring. Am I right?

Well on this occasion, my hotel owners have decided to do away with those boring options and have gone the “screw it” option and just leave the damn thing empty! I guess, in some ways, this is the perfect option for a craft beer lover, as I can stop in at the local bottle-o on the way home and pick up a selection of my favourite brews and put them in to chill. Who am I kidding, I will pick them up and leave them on the bench as I work my way through a tasty six pack…they will be lucky to make it to the fridge! 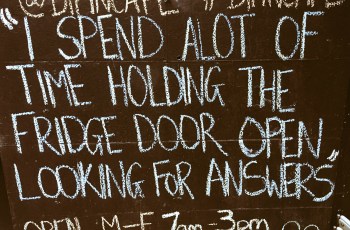 Don’t bother looking for them in the mini bar!

What’s the answer to save the ailing mini bar, is it the BYO method? I can hear many of you that love to save a few bucks, screaming out “yes please”! But what about those weary travellers that get in after work and cannot be stuffed heading out before dinner to find a bottle-o? The ones who just want to kick back and have a quiet beer as they wind down from their busy day? I say we should cater for them! I say we should cater for them and not offer them unimaginative run of the mill beers! Let’s give them a choice, and most of all, let’s make it affordable…no one wants to pay $12 for a bottle of mainstream lager, let’s not be greedy, lets price them at bottleshop prices…they are still going to make a decent margin on them!

As always, I have some thoughts on this, let’s make mini-bars interesting again, let’s take a look at my 5 beers to save the mini bar! Ok, you got me, it’s a few more than just 5! As I am starting to build a bit of an audience in the USA, I am going to make an American suggestion, as well as an Aussie one…plus a runner up in each category!

So here we go…let’s propose some beers to save the Mini Bar!

The “I just need to get one into me”. The thirst quenching beer.

You know what it’s like, sometimes you just want to get in the door and slam one down. Whether it be for thirst, or to just “take the edge off”, this beer is usually the most satisfying one! For this one, I am going to choose the Feral Brewing Sly Fox, a 4.7% Summer Ale with a nice citrus nose, that is a classic thirst quencher.

Now the American option, well I have enjoyed this one both in the USA and also sitting in the sun on the banks of the Yarra in Melbourne. It’s the Brooklyn Brewery Summer Ale…nice bitterness, floral aromas and easy to slam down, a really refreshing Pale Ale.

Runner up: Have a crack at Temple Bicycle Beer, not quite as popular as Stone & Wood Pacific, but a very refreshing beer.

The “Oh f##k, what a day, give me something serious” beer.

Higher ABV beers in consideration here, for when you really have had a crappy day and want to enjoy something full flavoured, that also packs a punch. You can’t go wrong with Pirate Life Double IPA…its just an all round great beer that packs an 8.8% ABV, lots of malt and hops, and is served in a big boy can…happy days. Look out for my #60SecondBeerReview of it next week.

As far as West Coast DIPA’s go, the Firestone Walker Double Jack would just about be the poster child for this style of beer. It has everything you would expect from this style of beer…citrus and grapefruit notes, backed by a very tasty malt backbone, and some nice resiny and piney notes…all wrapped up in a very nice 9.5% to put a smile on your dial!

Runner up: A tip of the hat to Dogfish Head 90 Minute IPA here, that’s a classic beer.

The “meeting clients, I need to stay classy” beer.

Lower ABV considerations here, and I still go back to my old favourite…Rogers. I am sorry, I think I have said this many times, but I just love this beer. If I wasn’t choosing a Rogers, I would have to say that a Stone & Wood Garden Ale is a close second…nice and clean and hopped to the hilt with Ella hops, you can’t go wrong.

Mid Strength beers in the USA aren’t quite as popular as here, but there are some great reduced ABV ones available. Don’t forget about Founders All Day IPA, my absolute fave, but other than that I would choose a beer from a brewery that is pretty hot right now…

Currently kicking ass with their Sculpin IPA’s, I choose Ballast Point Even Keel Session IPA. Lemony scented, crisp and golden, and only 3.8%, so you can have a few and still get up for that early meeting with your important client.

Runner up: Grab a Brewcult Reset Robot if you can’t find the Garden Ale, it’s an absolutely ripping beer from Hendo, a legend of the Aussie Craft Beer scene. If you can’t find that, seek out a Pirate Life Throwback IPA…another great beer!

You know I love my dark beers, so I had to work one in here somewhere!

Holgate Temptress, White Rabbit Dark, or Van Dieman Stacks Bluff, all beers I love…but on this occasion I am going to go with any of the Moo Brew special release stouts. If you have ever tried ANY of these beers, you know they are bloody sensational. If you haven’t tried them, you best get to Tasmania ASAP…you know fresh is best!

For the American choice I am going to the 50th state, a place I know very well, for a beer that I have drunk many times. If you are a fan of chocolate, coconut and beer…then you will love the Maui Brewing Co. Coconut Porter. At 6%, this is a real heart warmer and is full of flavour…seek it out!

Runner up: With all of its awards,it would have been too obvious to put this as my favourite, so I will give it second place…they absolute classic Nail Brewing Clout Stout. An Imperial Russian Stout brewed once a year and salivated over by craft beer lovers waiting for it to hit the streets!

Another old favourite of mine from big beer days is Southwark Old Stout…hard to get outside of South Australia, but worth the search!

The “having a cheeky couple of brews” option

Sometimes one beer isn’t enough, and you decide you want to settle back on the couch and throw on ESPN, or the nightly news, and just chill for a bit. Or, you might be keen to order in some pizza, or room service…just can’t be bothered putting your pants back on to go out for dinner (you know you get your shoes and trousers off as soon as you walk in the door and just get comfortable!). For this very occasion you need something you can have a mini session on.

You know, Kolscs beers get a bad rap, but I kind of like this beer style for when you want to have a couple. They are made with a light malty palate and not overly hopped, plus the look so good in the glass!

When it comes to Kolsch’s and Aussie brewers, I reckon you just cant go past the 4 Pines Kolsch. Being that the style isn’t overly popular, I was kind of surprised that these guys would want to put one on their roster? But anyway, they do, and it’s a little bit fruity and citrusy, straw yellow in colour, and very sessionable! I could easily sit back in my undies and slam a few down while watching SportsCenter’s Top 10!

Session beers are all the rage in the USA, there seems to be a new Session IPA popping up every other week. I love the style, but I have to say that I have only had this one once, but it stuck with me…the Lagunita’s Day Time Ale. Lagunitas refer to this as a “Fractional IPA”, I think that is just another way to say it is sessionable, or as the Americans say, this beer is seriously “chuggable”! However you like to refer to it, this beer is crisp and juicy, and not as heavy on the ABV as some other US craft beers!

Runner up: It’s an oldie (sort of), but a goodie (definitely)…the Two Birds Golden Ale. The girls are doing great things in the industry right now and this was the beer that started it all for them…give it a go, then have another, and another, and before you know it you will have had a session on it!

So there you go, my suggestions on how to save the good old mini bar by adding in a little bit of variety and flavour! Are these suggestions a silver bullet, or was it just a great excuse for me to fill in a cold evening on my own at a craft bar? Whatever, the case, I hope you enjoyed my suggestions…I certainly enjoyed talking about them while I chugged down a few pints!

Did you see my Sierra Nevada Tropical IPA #60SecondBeerReview last week? Look out for my review of Mountain Goat’s Barrel Breed Barley Wine this Wednesday!