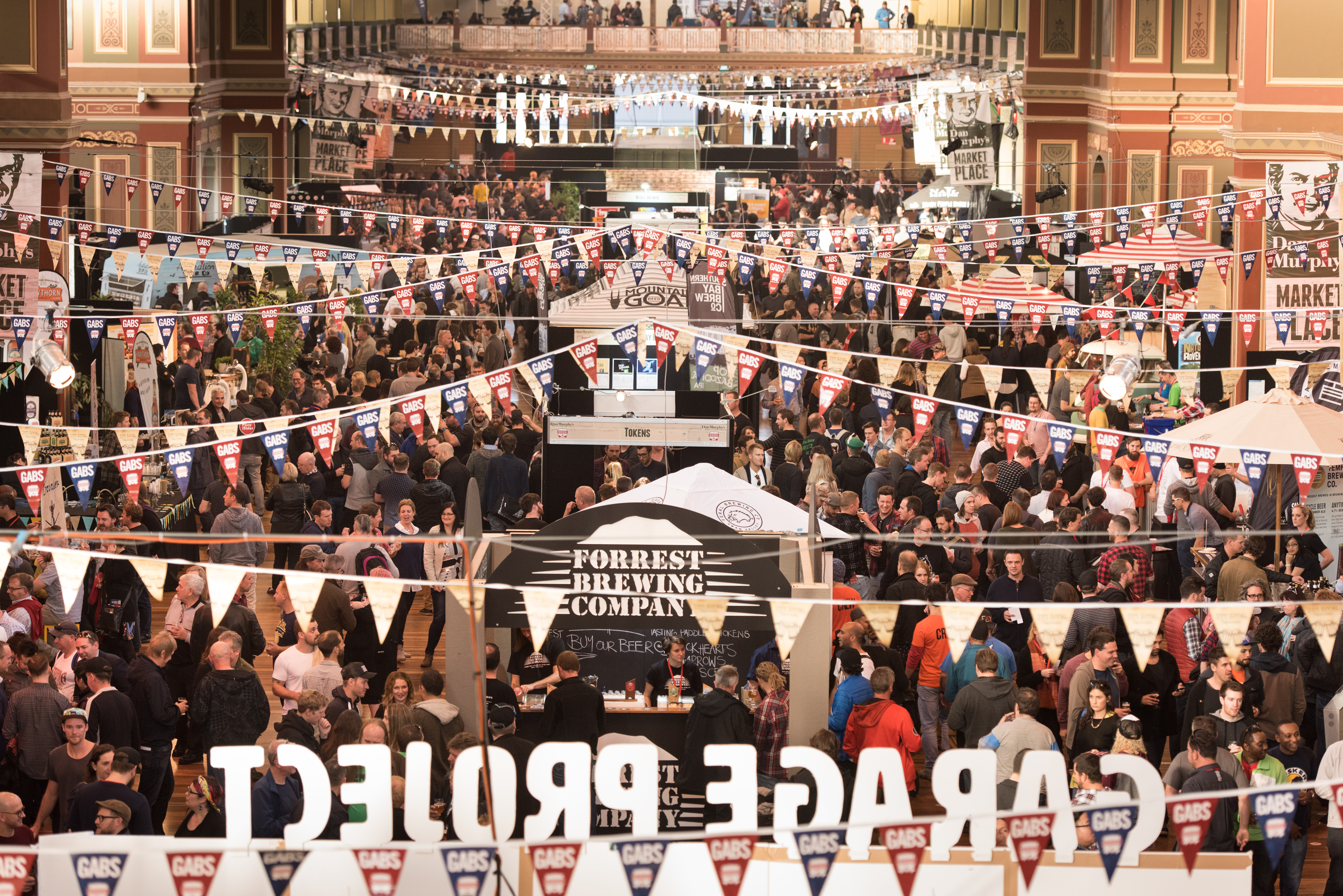 First up, did you see what I did there with that article heading? #Genius!

So if you didn’t see my video montage of my time at GABS last week, check it out here. My time at GABS really got me thinking about what I enjoyed most about my time at the festival…the beer, or the people, and it turned into the article below…enjoy! This past weekend, I achieved beer nirvana…I would call it Beervana, but another beer festival has already claimed the rights on that one. A few months ago I suggested to Mrs. Healer that I thought it would be a good idea for me to grab a notepad and pen and head over to Melbourne for an “educational trip” to The Great Australasian Beer SpecTAPular (GABS). To my surprise, and delight, she agreed, so we headed over sans-kids for a weekend in the big smoke.

Having paid my dues with wifey on Friday afternoon, you know, lunch and shopping, I was very ready to get on down to The Royal Exhibition Building and immerse myself in one of the great events in Australian Craft Beer. Dressed in my best beer t-shirt and trucker cap, and armed with my notepad and phone, I was ready to write a few notes, drink some beers, throw my notepad in my bag, and just drink some more, while also occasionally recording some drunk (and getting drunker videos) for your viewing pleasure!

So that was me, all excited about my first GABS. It was a beautiful night in Melbourne, quite mild for Autumn, and plenty going on. There was a footy game on at the G, multiple shows at theatres, and plenty of people out at the pubs looking for love. I jumped on a tram and headed up to the Royal Exhibition building, checking on my app during the ride to see what beers I had identified as the ones I was keen to taste.

The festival was a buzz with beer lovers and all kinds, excited to finally to be inside and having access to some of the greatest craft beers in the country.

So here I was, ready to jump straight into the paddle tasting but thought I would take an initial walk around to scope out the scene, and then it happened…GABS for me became less about trying the weird and wonderful beers, and more about the people in the room. Don’t get me wrong, I was still keen to get into a few beers, but once I got talking to people I just couldn’t stop! Side note: To be honest with you, I was going to GABS with more than beer tasting on my mind, I was kind of there to network as well. You see, as a beer writer (yeah that’s what I call myself!) who lives in Tasmania, I miss out on a lot of stuff. It’s not always easy to keep your finger on the pulse, and being that this is a hobby for me, dedicating time to doing this is a labour of love and so I need to prioritise earning a living and looking after my family, which means I don’t always get to attend all the events I want.

It took me at least an hour to get around the hall and actually purchase my first paddle of samples, and that was fine with me. You know why, cos I had been involved in a bunch of great conversations with people around the room…okay and a few free beers too…I didn’t go thirsty!

I spent that first hour, and the next few after that, just listening to, and sharing, stories with like minded beer lovers. Stories of mates helping each other out when one brewer at one end of town forgot to order specialty malt for their brew that day. Stories of amazing beer recipes and how they came to be brewed, stories of legendary brewers who were just across the room, now working at a stand for their own brewery. Stories of the good times shared over a beer with my mates at the big brewer, who, like myself had moved on to other jobs, but still shared that indelible love of beer as a result of our time there. And stories about legendary beers that we wanted to try one day. Time flies when you are having fun, and my night just flew by! 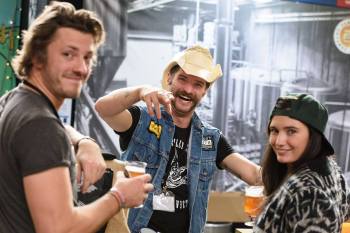 It got me thinking…you know that pop culture game “6 Degrees of Kevin Bacon”, well the craft beer scene is kind of like that…but with less degrees of separation. I think it’s more like “3 Beer-Grees of Craft Beer Nation”…see what I did there with my second variation…clever, hey! Maybe I should work in marketing!

Every person I spoke to that night, we eventually got on to the topic of our beer history, where we worked, who we worked with and who else we knew on the scene…and I kid you not, we could connect the dots every single time in about 3 steps. I guess it doesn’t hurt that during my time with Lion they purchased one of the most influential craft breweries, and best training grounds for aspiring brewers, in Australia…Little Creatures. A lot of the links to other people were via this brewery, something that made me proud to say I had worked for them, and something that should make any “Creature” proud of the influence that brewery and its culture had on the Australian beer market.

I kept playing the game all night…here are some examples:

I was chatting with head brewer of Panhead, who obviously knew Mike, the owner, who was having a conversation two feet from us with the amazing Jane from two Birds Brewing, who knew my mate Dave from Little Creatures.

Or what about Foxy, a brewer from Colonial Brewing, who I had in spent time on XXXX Island with during our time at Lion, who worked with Kiwi (Jacob) at Colonial, who was hanging out with Nail Brewings Pia Poynton, who I had just met and was having a beer with. That’s just my experience, and I am a bit of an outsider, but I suspect it is even closer if you are actually working in the craft beer community. I am sure that everyone involved in the community has a story along the same lines…sharing ingredients, helping out with stock deliveries, swapping keg couplers, or helping each other out with temperamental beer systems at festivals. I also love to hear the stories and see the pictures on Insta of “competing” beer ambassadors pranking each other, sticking their brands stickers on the other ones cars and all that good type of fun.

I wonder if other countries with vibrant craft beer scenes have similar degrees of separation with the people involved in it? Who is their Little Creatures (or maybe I should actually say the old Matilda Bay, probably the true first craft brewery in WA), spawning new generations of brewers and craft beer ambassadors. Is it Sierra Nevada or Boston Beer Co. in the USA, maybe Emmersons or McCashins in New Zealand, perhaps its Brew Dog or Fullers in the UK? I don’t know, but it would be interesting to hear your thoughts on this one, based on your knowledge of your local market? Hit me up with an email or tweet to let me know. 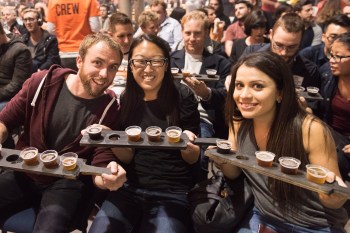 It was the next day, while reflecting on my night, through a thumping head (thanks to the Pirate Life 14% IPA’s after closing time), the real reason why I love and miss the craft beer industry so much. It’s all about the relationships! Okay, don’t get me wrong, it is definitely about sensational beer, but it’s the people that make the craft beer world go round, and it’s what I find so infectious. The Craft Beer community is so inclusive of everyone within it, well maybe except for anyone associated with Yak Ales…but that’s a story for another day!

When I was chatting with one of my ex-colleagues, he asked me why I had left the company, to which I replied that the opportunities I was looking for at Lion weren’t available to me in Tasmania, and I wasn’t willing to move the family interstate to chase them. He asked me, “Would you come back”, to which I emphatically replied, “Hell yeah”. I write this blog to make me feel like I have a link to the industry still, I feel like I might still have something to offer, but often it just makes me envious of those of you who are pursuing your passion, and getting paid for it. Cheers to you!

Side Note: For what it’s worth, I did try my fair share of the GABS specialty beers and my favourites were

So that’s my take on this industry for this week, and a great industry it is! Look out for my 60 Second Beer Review on Murray Brewing’s Red Skully IPA this Wednesday, or maybe check out my GABS Video from last week.

Thanks to the GABS Festival crew for allowing me to use their photos in this article.