Checking back in on my fave American Craft Beer.

Last year I took a look at some of my favourite American Craft Beer and came up with the list below. Love it, or hate it, this is the 10 that I came up with, I think there are some ripping beers shown here.

I was drinking an Oskar Blues Dale’s Pale Ale this week (check out the video soon) and was thinking to myself that it was about time that we saw these beers being sent out to to us Aussies! It then got me thinking a little more about the other beers from the good ol’ USA. With all of the new beers being sent out here now, and the latest trends in brewing, would my Top 10 from 12 month ago still ring true for me, or would I pick a whole new bunch of beers?

Looking at the beers above, I still stand by my choices and would probably choose many of them again this time around. However, I have decided to pretend those beers don’t exist, because I didn’t want to create a new list and repeat beers from last year, that would make this whole article dead boring…so let’s make a new list! 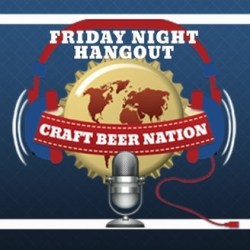 Oh, just a note on this list…remember, these are beers that I have tried and can get in Australia. I am sure that there are many beer geeks out there that are going to give it to me cos I haven’t listed the latest barrel aged sour from Jester King, or the latest New England Pale Ale from Treehouse…thats’s cos I can’t get them out here!

I joined in with the Craft Beer Nation guys just recently in one of their Friday Night Hangout Live Streams, and they were all drinking and talking about beers that I just can’t get out here…I was so jealous as I drank a local beer. Well jealous, but also hung over from a few too many home brewed Citra Pale Ales from the night before, so I probably wasn’t quite in the mood to truly appreciate them as I should!

So anyway, wrapping up that little rant, don’t harass me cos I have an inferior list of favourites (in your opinion), I just have to work with what I can get my hands on out here!

Enough of the justifying my picks…here they are!

The first I ever knew about this brewery was just before it copped some flack on the inter-web for “selling out” to AB-InBev. I had just bought a mixed 9 pack of some big boy cans, all IPA’s. I was really impressed with each of them (Wolf Among Weeds and Point The Way were the other two), but for me, the Heal The Bay was a stand out. Citrusy notes over juicy fruit flavours and a light malt backbone, finishing strong and bitter…I’m drooling just thinking about it!

After trying the beers, I did some reading into them and found out about their history and their leading lady, Meg Gill. I love diversity in the craft beer scene, so I really liked hearing about her story…then sale went through and the story got a little bit tarnished.

Still, I love their beers, and when I visit Los Angeles again I will drop by the tap room!

I have really fond memories of enjoying this aromatic beauty on holiday with my family in sunny Queensland. The beer was pretty fresh when I tried it, and compared to a lot of American beers we get out of here, still had a good aromatic punch to it.

I have read some negative comments about this beer online, “doesn’t live up to the hype”, “they are cheating with the oil” and “better beers around”, but I really liked it.

Being a massive fan of dark beers, this one was always going to make my list! Being malt driven, it travels well to Australia without being spoiled…having said that I did see some on a shelf recently that were nearing date, wasn’t sure if I should give them a try or not?

Not overly carbonated, creamy foam head, roasty aromas and deliciously sweet caramel and chocolate taste with a bit of a coffee overtone.

EVERY time I drink this beer, I have it with a Snickers bar…go on, give it a shot!!

Some craft beer purists will pull me up on this one, being that the brewery is now part owned by Heineken, but I don’t care because they still make great beer.

An IPA that is brewed with wheat, so it makes it a little more interesting than some…you might call it a Hoppy Hefe? Wafting with tropical fruit aromas, lashing you with juicy flavours, crisp and refreshing for a 7.5% beer, and finishing you off 65 IBU’s that seems just right.

No great secrets here, the tip with this one is to get it fresh. I’ve had it in the USA and out here, and the fresher one kicks the older ones ass!

People often look at me funny when I tell them that I am into craft beer, but I also love mid-strength options (Approx 3.5% – 4.2% in Australia). I say why not? Brewing a tasty craft beer that allows you to have a session and still keep your head is an absolute art form, many have tried and failed…but not these guys. Granted, this beer is slightly above what is considered mid-strength in my country, but it is also a lot lighter than other IPA’s, and can still hold it’s own!

Aroma’s of grapefruit and mango, taste is a bit piney, a bit fruity and sweet, and it finishes with a nicely balanced 65 IBU’s.

I know that many craft beer fanboy’s will be bagging me out for choosing this beer and not one of the “so hot right now” Sculpin range, but this is a bloody great Double IPA, for real!

At 10% it is a beast of a beer…10% is about as high as I like to go with my beers, over that and I think it gets a little too much. Anyway, this is a complex, fruity, hop forward masterpiece that gives you a mix of juicy fruit and pine needles in the mouth. It’s heavily hopped but the malt backbone is strong enough for it to still be pretty nicely balanced. This is a classic!

The first time I had this beer was a few years ago at a dark beer night…it was the last one of the evening, after we had worked out way through a few brown ales, porters and stouts. They certainly saved the best for last on that night, I immediately had a beer-crush on it, as I took a mouthful of a rich chocolate mousse and washed it down with this beer…heaven in a tulip glass!

If any home brewers out there have a great clone recipe (Beersmith?) for this beer, I would like to see it. I have a Brewie on order, due before Xmas and this would make a great present to give my Dad, who also loves his dark beers!

This beer pours deep and dark with a tan coloured head. One sip and you are hooked by its big chocolatey hit, and the aromas of coffee and chocolate racing up your nasal passages. Smooth with a lingering bitter finish a little bit of smokiness.

This a pretty distinctive beer, a Saison that is hopped up with a hard to find (but becoming quite popular) Japanese hop that was originally grown exclusively for Sapporo in the 19080’s.

It pours a hazy golden colour in the glass with a bright white head that laces all the way down the glass. Very Lemony and zesty on the nose and tastes of banana, lemon and that belgian yeast flavour that I know is there, but find it hard to describe.

This beer is probably best described as dry, bright, bubbly and zesty…but it’s “All G” as my kids would say. That’s all good for those not in the know! 😉

In some ways, the art of the Pilsener has kind of been forgotten because of the multitude of “me-too” International Premium beers available. A well made Pilsner is a thing of beauty, like dew on the morning grass, or a baby’s first smile, or a Roethlisberger to Brown Touchdown pass. Every now and then you get one that for some reason surprises you (the old James Squire Pils did that to me in the past) and makes you want to come back and give them another chance.

Prima Pils is just that, it’s hazy and golden like you would expect and has that typical bready pilsener aroma and then pow, its just a great tasting beer. Plenty of flavour, peppery and herbal and finishes smooth, light, and crisp with a solid bitterness.

Another big beer on this list at 9.75%, but it is also well balanced. Using some of my favourite hops in Citra, Amarillo, Cascade and Chinook, this beer is just punches out aromas of pineapple, and passion fruit with a sweet caramel-ish honey malt aroma…it awakens the senses.

Those tropical flavours continue on into the mouth, followed by a nice punchy, piney bitterness that is backed up well by the malt base. A stellar DIPA.

Before I sign off on this article, there is one more beer I am sure I would add to this list, but I have never been able to get my hands on it.

..Founders Kentucky Breakfast Stout. This beer is so sought after by beer nerds that the brewery apparently has to spend weeks managing the release to ensure all of those beer lovers get their allocation. The two major beer review sites have it listed at 100/100, so it must be special.

An Imperial Stout brewed with coffee and vanilla and aged in oak bourbon barrels…I am drooling!

I have had a few offers of beer lovers near the brewery offering to get me a bottle, I think it’s time I took one of them up on that offer.

So that’s it for my Top 10 USA beers revisited…hopefully you either share some of my views, or want to go and find a couple of them to check them out for yourself.

I’ve been busy posting videos to my Facebook and YouTube pages for the past few weeks, check them out, or view my latest video below.

As an American, I would say your selection is pretty OK based on what you are probably limited to be able to get… There are a few on my List withing the US continental states that are even hard for us to get.

I wish the world could get Harpoon IPA. To me, if there is one thing that is the most respectable about it is for a craft beer to be consistent in its flavor. Many on your list do not have that and it’s a shame.

In Freeport Maine there is a small brewery that has the same issue with 2 of their seasonal offerings that KBS has in that they have to control the release. One called “Lunch” an IPA offering, and their double IPA offering called Dinner…. Both very tasty brews to be sure…

Thanks for reading mate! I must find Harpoon IPA the next time I am over your way!