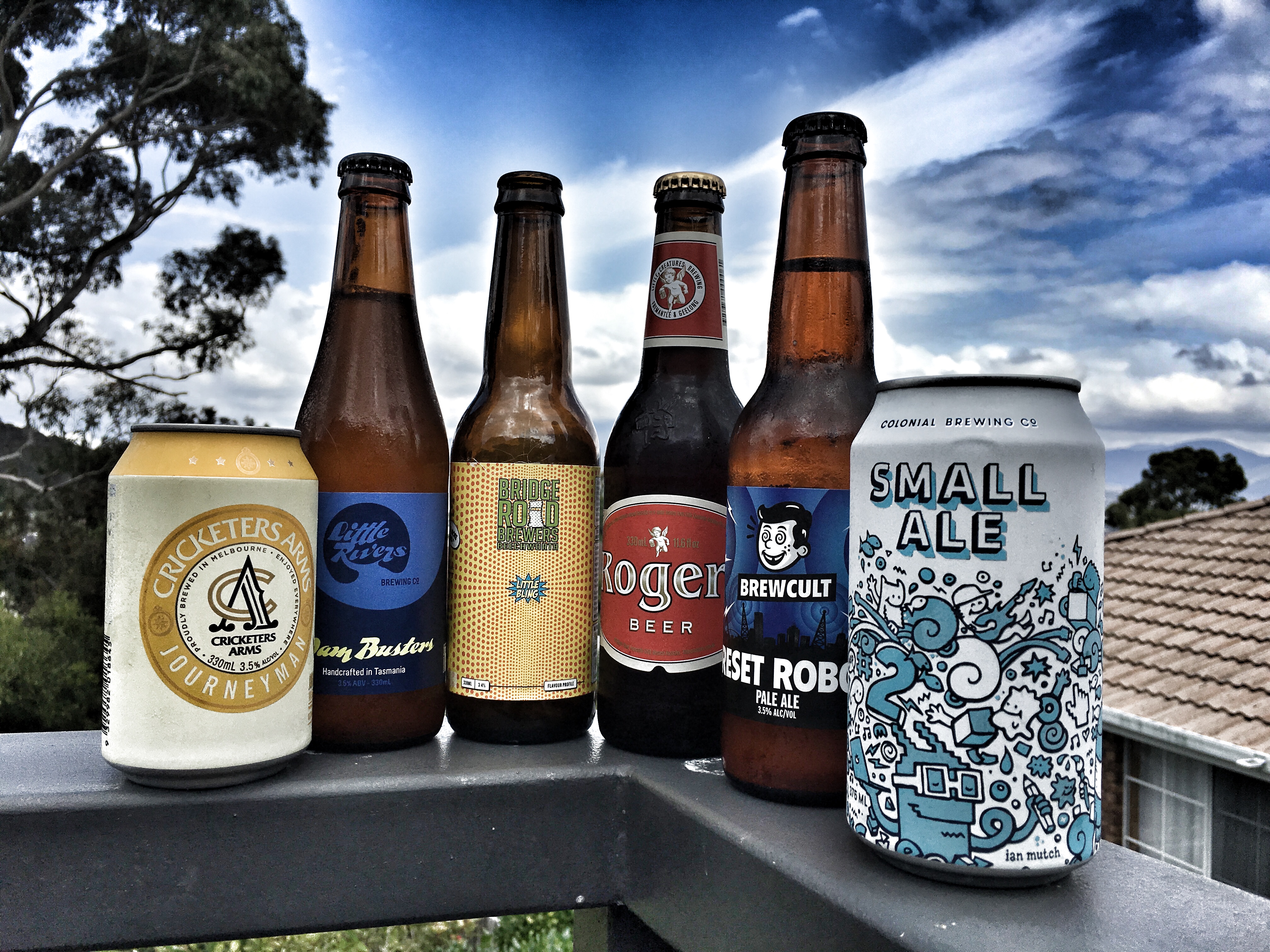 I love Mid-Strength Craft Beer…are you with me, or against me?

There are so many things I love about craft beer…the community and the culture, the variety, the creativity, the taste and the process. But, I have to be honest with you, I am not a huge fan of the higher ABV’s that tend to go hand in hand with more flavoursome beers. 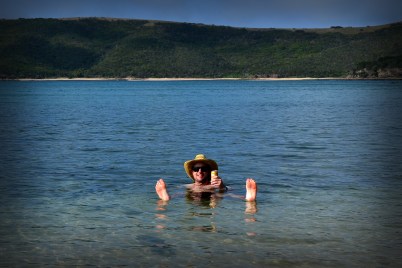 Yeah, I’ll admit to drinking a bit of XXXX Gold. Spending time on XXXX Island will convert you!

I have never been a great drinker, a claim that my friends and family will only too happily back me up on! I remember entering the beer industry and being a little concerned about being able to “keep up” with some of the members on the sales team who were renowned drinkers…then I found XXXX Gold, and that saved me on many occasions.

These days, I am still not great at holding my liquor, but I now look for more flavoursome mid strength options. While my pallet has matured to enjoy fuller flavoured beers these days, I find that I still have to fall back on old ways and drink Goldies on occasion due to lack of supply, or the fact that when you DO find a decent mid-strength craft option, it ain’t cheap! 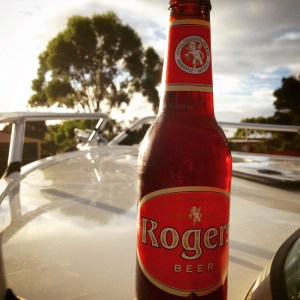 So, now I am on the lookout for more exciting options than the old Goldies, even dedicating time to film short reviews over on my Youtube and Facebook pages. But, am I in the minority in loving the lower ABV, fuller flavour beers? I am not sure, but I was keen to find out what others in the industry thought and have been talking to any brewers that have time to chat to me about the topic.

I have also had a bunch of Redditor’s in the USA reach out to me and update me on the state of play for mid-strength in their homeland. It seems that the USA is only interested in sub 4% beers when they are sour beers…kind of like Feral’s Watermelon Warhead. NZ on the other hand kind of define mid-strength in a slightly higher ABV band than the 3.5% I was thinking of, but also take some inspiration from the USA market. Out here in Australia, it seem we are starting to drink mid strength beers that taste a bit different to what we have drunk in the past, but it’s a slow burn to change the game. 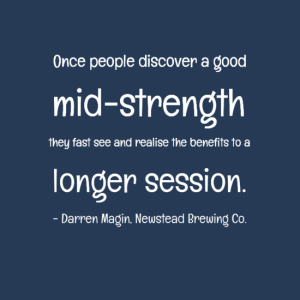 So, back to the brewers, there were some great conversations being had over email on the topic these past few weeks. I’ll try to summarise them into something less than mid-strength War & Peace for you.

I first of all wanted to know if there was a stigma with mid-strength options in the Craft Beer world. In this country, mainstream beer lovers are very much in tune with the functional benefits that lower ABV beers offer, but maybe craft drinkers are tuned differently?

One brewer suggested that the term “mid-strength” was not so much a craft beer term, that it’s associated with the mass produced, lower flavoured, lower ABV, Aussie Lagers. He preferred the term “Session Ale”, but also suggested that category was more closely aligned to the USA market where anything up to 5% is considered a Session Ale, not the 3.5%-ish version I am talking about. 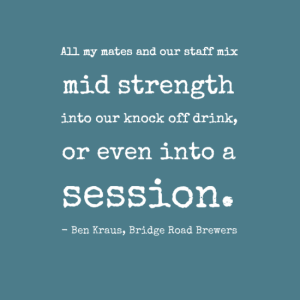 Maybe the stigma is with drinkers expecting all mid-strength beer to taste the same? But, having tried quite a few lately, I am here to say, that is bullshit. Is it that only pussies drink lower ABV beers? I do remember harassing one of my mates who was an early adopter of the mid-strength beers, but after having kids, and the associated early mornings, I changed my tune there.

Based on the feedback that a few brewers like to let drinkers “discover” their beer is mid-strength, I’d say there IS a stigma…these guys know the market. Many of the breweries I spoke to actually already had a mid-strength offering, but as mentioned above, many went the discovery route with their drinkers. Others, like Newstead Brewing and their “3 Quarter Time Session Ale” were up front about the ABV, where as Bridge Rd had better success with not leading with the ABV as the main selling point with their Little Bling. I don’t have a definitive answer as to why some choose to put the mid-strength message front and centre, and others prefer to let people “discover” it themselves, or even shy away from the fact all together? I personally don’t care if a beer is high, or low, in alcohol…if it tastes good, I am gonna drink it. Is it a craft beer thing that we only consider beer to be good if it is above a certain ABV? I would argue that it takes just as much skill, if not more, to brew a great tasting mid-strength vs a Double-IPA…what do you think?

Interestingly enough, Mountain Goat told me that they are testing the waters with a mid-strength at the moment. I will be keen to see which route they take with their  beer. I hope that they go with ABV as a selling point, no shame in drinking great tasting craft beer that is also mid-strength. 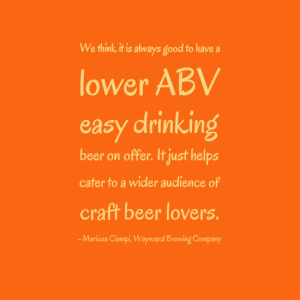 As most of the guys and girls I spoke with already had a mid-strength offering, I wanted to find out if this was just consistent with the conversations I was having with my small sample size, or if it was a common theme in Aussie Craft Beer. So, I went to our mates over at Craft Beeer Reviewer, where there is the most up to date list of Aussie craft breweries that I know of, and proceeded to randomly click through to a bunch of brewery websites. Once I got down to Western Australia and clicked through to my 100th site, the score was 55-45 in favour of having no obvious mid-strength option (well that I could find, anyway). I felt that was enough research and I took away the fact that there is no clear “must have” attitude to mid-strength with Aussie Craft Breweries…something I have to say I was a bit surprised about. 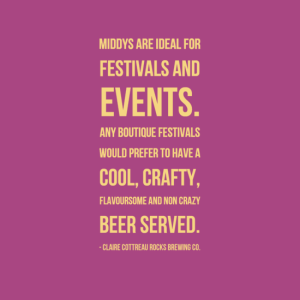 What about the USA, while Aussies take a lot of direction from them with so many things these days, including beer, it does seem that their markets is very different to ours. But surely there is a place for mid-strength craft beer? Well, I am generalising here, but from what I could tell, there isn’t the same general mid-strength desire, as in Australia. I had some great conversations with some guys from the USA on Reddit where they filled me in on their local market. Again, so as not to give you war and peace, I have plucked some of the key comments that I received from the Reddit community:

Reditor, turkeypants noted that, in the USA “there’s no real notion of “mid”, or at least that concept hasn’t really solidified as a thing because there’s no real low-end to compare it to”. 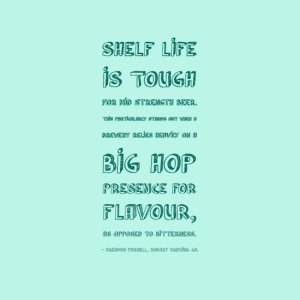 Even though the USA don’t recognise the Mid category, are there lower ABV craft options? JaymeKay commented on the lack of mid-strength craft options…“I’ve seen a few, although if my crowd is going ‘light’ we typically buy Rainier, PBR or Kokanee – not craft – largely because of the price factor. Also, it’s a different kind of drinking.” So maybe this is similar to my drinking of XXXX Gold for similar reasons, perhaps?

We also chatted about the classification of “session” vs “mid-strength”, to which old mate turkeypants replied “the whole session trend that you’ve noted examples of has sort of sporadically produced lower and lower ABV beers of various pseudo-styles, though “session” here is a nebulous threshold and many if not most in my observation are still above 4.” A few others noted this session style being the closest thing they have to mid-strength, well except for sour styles like the Berliner Weisse, which although popular, aren’t really the kind of beers this writer had in mind when beginning this article.

So overall, I think the love of mid-strength beer is a bit of an Aussie thing. One Redditor suggested our Summers were hotter than in the USA, but I don’t think that is quite right. Maybe it’s a drinking culture thing? Maybe it’s a healthy lifestyle thing, or a result of pretty tight drink driving laws? Whatever it is, loving mid-strength beer is totally OZ..Straya! But in writing this article, I am starting to think that the love of mid-strength its either more for the mainstream drinker, or the craft community has some work to convert them to fuller flavour mid strength beer.

So after all of that, let’s wrap up this journey into the world of mid strength craft beer…

Is there a stigma against mid-strength craft beer? Yep, I think so.

Is there a consistent trend towards a particular style for mid-strength beer? Yes and no. Maybe Sours in the Northern hemisphere, light but aromatic pale ales and perhaps some ESB-ish ales in Australia…but nothing like the dominating Light Aussie Lager style in the mainstream beer market.

Do craft breweries feel they need a mid strength? I am going to say no. It’s a choice, maybe a choice that many will make if they want to attend festivals and other public events, but maybe not required if you have a brewery that serves your beer and you have no desire to do the festival circuit?

Do I wish that there was more mid strength craft beer in the market? Yes! I just automatically thought that there would be a natural progression mid-strength loving Aussies. That as they slowly made their transition from mainstream over to craft beer, they would still want the benefits that a lower alcohol beer brings and seek out a craft version? Maybe those drinkers shift to craft for flavour, but when it’s time to drink a functional beer they are happy to drop back to their mainstream ways?

You know it’s funny how you go into something like writing an article like this with a pre-conceived idea, like “I love mid strength craft, so everyone else must want it too”, and find out that your own personal view is not necessarily consistent with the market. But that’s what I love about craft beer…everyone has an opinion, everyone likes different tastes and styles, and there is no silver bullet for catering for all craft beer drinkers…diversity at its best!

Merry Xmas, by the way. If you have a Beer Advent Calendar, you will know how awesome they are. I am opening mine every day and posting a really short video on my Facebook page for each beer.