And you will know my name is the Beer Healer!

Sorry for the lack of posts on the site this month, but I have been busy recording videos for my nightly Advent Calendar beer reviews. I have been mucking around with trying different things, including singing and rapping (very badly) my reviews to classic songs…let’s just say that it has been interesting! 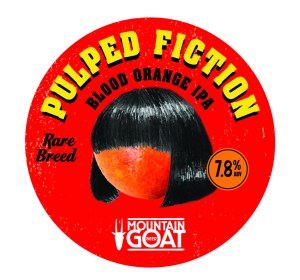 Anyway, it just so happened that at the same time as I was getting all creative with those videos that this beer landed on my doorstep…The Mountain Goat Rare Breed Blood Orange IPA, or Pulped Fiction. The Rare Breed series of beers have always been highly sought after, and this one will be the same. It’s funny, when these guys were bought out by Asahi, all the naysayers said that their beer would turn to shit and things like the Rare Breed program would disappear. To those guys, I would argue that the RB program is firing on all cylinders…some of their recent releases have smashed it out of the park…including this one, and the rest of their beer are doing just fine!

Anyway, let’s get on with it. For this beer, I got inspired to do something a little special for this review and re-wrote the famous Samuel L Jackson Ezekiel speech to give it a craft beer spin. Going all in with this one, I even shaved my beard into the sideburns and handlebar moustache he sported in the movie. Check it out.

#60SecondBeerReview: Battle Of The Pilsners